On 21 October, 2014, during our worship in Succat Hallel, I saw a vision of a huge black dragon that was circling in a menacing manner above the Temple Mount here in Jerusalem.  Each time it breathed fire from its mouth, violence was released on the Temple Mount.  But I knew this time it was planning something really much larger.  Suddenly I saw in the heavens two words: “NOT NOW”.  Then a huge foot descended from heavens and pinned the dragon to the ground.  Next, the Lord reached down and put shackles on the dragon’s feet and imprisoned the dragon in the underground mosque on the southeast corner of the Temple Mount.  As I was seeing this in the vision, our worship leader started singing from Psalm 149 about us through high praise putting the kings in chains and the nobles in shackles.

Next, I saw the Lord’s hand put a lock on the door to where the dragon was imprisoned, and then put a lock on it with a timer, seeming to indicate it would be released to do something quite “big” in the timing of the Lord, but that now was not the time.

Then the hands of the Lord continued to shake and thresh the Temple Mount in a flat threshing basket, as I had seen in previous visions on 17 June and 14 October.  The Lord was tossing the Temple Mount into the air in a way similar to the ancient threshing method of tossing grain into the air, after which the chaff would be blown away by the wind, and the good grain would fall into the threshing basket.  I felt the Lord was speaking “This is still a season in which I am sifting and discerning the hearts of men and nations”.   I realized He was showing mercy to those who really were searching for truth and righteousness.  Even on the Temple Mount, in the midst of the shakings, water came out from between the stones, splashed into the eyes of those Muslims who were sincerely seeking righteousness, and washed away deception, and opened their eyes to Jesus as Messiah, Savior, and Lord.

Then on 29 October, a Palestinian attempted to assassinate Rabbi Yehuda Glick, who had just given a lecture to a small group in the Menachem Begin Heritage Center, expressing his belief that Jews and Christians should also be allowed to pray on the Temple Mt., and not only Moslems, as is the status quo.  Four shots were fired into him at point-blank range.  Miraculously, he not only survived, but is recovering.   His Palestinian killer was from the neighborhood (Abu Tor) in which we have our 24/7 prayer and worship center, Succat Hallel.  He fired back at the police when they tried to capture him, and was killed in the ensuing shootout.

Many predicted the next few days would be a time of huge violence and the start of a new “intifada” (uprising) in Jerusalem, similar to what took place in 2001, and was followed by four years of numerous suicide and bus bombings in Jerusalem.   We strongly prayed into the words from my Oct 21 vision “Not Now!.   On Saturday, 1 November, great violence was predicted, but rain fell quite heavily in the morning.   (News sources even credited the rain with helping to calm down the situation).  That afternoon, in Succat Hallel we were singing over Jerusalem: “His love never fails, never gives up, never runs out on you.  It’s higher than the mountains that you face, and stronger than the power of the grave…” At that exact moment, a huge rainbow appeared, and seemed to be touching the Temple Mount! 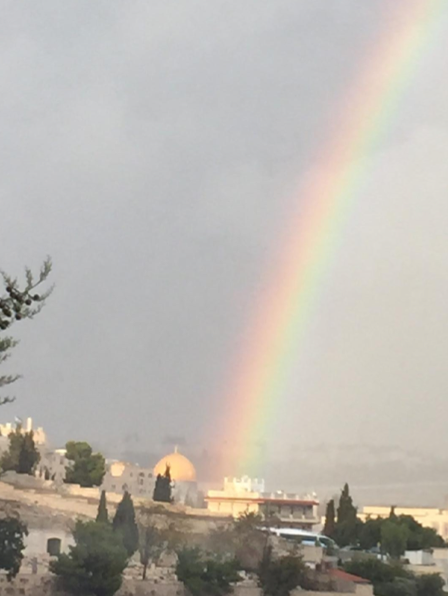 Then on 4 November, I had another vision concerning the dragon in which I saw the dragon shrieking, and trying to break out of the dungeon in which it had been imprisoned.  I saw a rainbow hammer come down to make the door even more secure.  But I saw the dragon was sending frog-like demon spirits from its mouth (similar to what is described in Revelation 16:13).  These spirits were going into various terrorist leaders and giving them words to incite to terror.  The same spirits were also working through characters on Muslim children’s television, inciting them to violence, urging them to “Kill the Jews”.

I felt the Lord say we were to ask Him as the Judge of the Universe to give a “gag and restraining order” to silence the dragon for this time period.  I saw a throne with seven lions down each side, and the Lamb in the middle.  As the Lord gave this restraining order, I then saw believing children in the Middle East who were worshipping the Lamb.   Then angels began to go to Muslim children and whisper in their ears: “Love the Jews”.

In a strong confirmation, I was asked to share at a meeting here in Jerusalem on 6 November with Chuck Pierce.  Chuck did not know about the vision I had of the dragon, but said that as he and his team flew into Israel, they saw a sunset that seemed more like glory was arising over Jerusalem, rather than going down.  But in the sky above this light they all saw a cloud that looked clearly like a dragon, and had the sense there was a dragon spirit trying to swallow up the glory that was about to be poured out in Jerusalem.

1.  Proclaim the sovereignty of the Holy One of Israel over His Holy Hill, the Temple Mount, in Jerusalem.  Proclaim Ezekiel 43:6,7: “While the man was standing beside me, I heard someone speaking to me from inside the temple.  He said: “Son of man, this is the place of my throne and the place for the soles of my feet. This is where I will live among the Israelites forever.”

2.  Proclaim “Not Now” to the forces of evil trying to stir up something big, like a prolonged violent uprising in Jerusalem, or even a regional war in the Middle East.

3.  Pray for much revelation of Jesus on the Temple Mount, in Jerusalem, and across the Middle East.https://succathallel.com/donate/

5.  Pray for mercy upon men and nations whose hearts are being “sifted and threshed” by the events taking place in Jerusalem and on the Temple Mount.  On January 1, 2014, my wife, Patti, had received a strong word that this was a year of “shifting and sifting”.  I believe we are still in that season, even here in Jerusalem.

Action Point: Give towards the support of Jewish messianic and Arab believing staff that are helping lead our 24/7 worship and prayer facing the Temple Mt. in Jerusalem.  For more information, go to: https://succathallel.com/donate/

Thank you for standing with Jerusalem in your prayers during this very strategic season!

1 thought on “A Vision of The Temple Mount, A Menacing Dragon, And A Season of Increasing Shakings”