On June 17th, I had a vision in Succat Hallel of a new season in the Middle East defined by the re-drawing of its borders.   I saw angels being released who had sashes over their shoulders on which were written the phrase “Border angel”.  They were being sent forth to reset borders according to their original ethnic calling.

In Deuteronomy 32:8,9 it states that “When the Most High gave the nations their inheritance, when he divided up all mankind, he set up boundaries for the peoples according to the number of the sons of Israel.  For the LORD’s portion is His people; Jacob is the place of His inheritance” (NIV).  Isaiah 19 describes a future messianic federation where Egypt,  Assyria (the area of that ancient empire includes most of the Middle East), and Israel are joined together in His worship, “…a blessing in the midst of the earth, whom the LORD of hosts has blessed saying, ‘Blessed is Egypt My people, and Assyria the work of My hands, and Israel My inheritance’.” (NASB)

An altar among the Kurds

In the vision I received, I saw these “border angels” going forth in a focused way to the Kurdish autonomous area of present-day Iraq.  They started pulling on and protecting borders.  I saw an altar of prayer and worship to the Lord in the heart of this Kurdish region, where more and more stones were being added to it, causing the altar to be raised up higher and higher.

Next, I saw bulldozers and cranes carving a deep pool in this Kurdish region.   I felt this was a reservoir being created to hold waters of the Holy Spirit.

A gallows for Haman

Then the vision shifted to the predominantly Sunni region of Iraq, much of which had just recently been taken over by the extremist group commonly referred to as ISIS (short for “Islamic State of Iraq and greater Syria”).  Their Arabic name refers to “al-Sham” and refers to their goal to see a restored Islamic state, or caliphate, not only in the Sunni areas of Iraq, but in the entire region “stretching from southern Turkey through Syria to Egypt (also including Lebanon, Israel, the Palestinian territories and Jordan.” (4)  According to news reports, the ISIS terrorist army is seriously considering invading Jordan next, and the “slaughter” of King Abdullah. (5)

In the vision I saw, however, this Sunni “nation” was allowed a more restrained border that would take in certain areas of present-day Iraq and Syria.  I saw a wall going up on the eastern border of Jordan, which was keeping ISIS from over-running Jordan.  Then I saw the barbaric leader of ISIS, Abu Bakr al-Baghdadi, building a gallows like Haman.  My sense in the vision was that the Lord would allow the “ISIS” group to control a certain area for an allotted time, but that they would do such extreme things that they would be building their own gallows, and that a generation of young people would arise in that area who would become disgusted with fundamentalist Islam and become open to Jesus.

As things went from worse to worse in the ISIS-controlled areas of present-day Iraq and Syria, I saw in the vision that the Kurdish region was protected and that the rains of the Holy Spirit began to fall upon their area and started filling their “pool” with the water of Life. 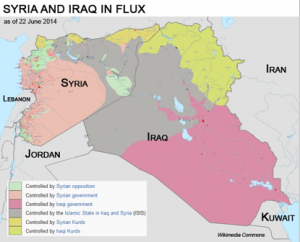 Next in the vision, I saw a “Tower of Babel” (which I knew represented a nuclear program) being built in Iran. The Lord sent a distraction, and someone came and whispered in the ear of the leader.  He then said to those around him that he needed to change his focus for now and go to Baghdad to try to stop what might happen there.

Then a voice in the vision said: “Sushan is mine”.  Interestingly, ancient Sushan, where Queen Esther and Mordecai lived, is now in the western part of present-day Iran.  I then saw the blood of Jesus being poured around borders of ancient Sushan in western Iran.  I felt it was being targeted for a strong move of the Holy Spirit to reveal Jesus.

Then in the vision I saw the huge fires in Syria start to die down and turn to smoldering ashes.  Out of the ashes I saw seedlings arising, which I knew represented a move of the Holy Spirit to reveal Jesus to youth & children.

Next I saw the wind of the Holy Spirit blowing upon the Temple Mount in Jerusalem.  As the wind grew stronger, so did the shakings.

Finally, in the vision I saw the “pool” of the work of the Holy Spirit amongst the Kurdish people filled to overflowing and to begin to spill over its borders to the neighboring peoples.

Pray for rains of the Holy Spirit to be poured out on the Kurdish people during this window of opportunity. About 18 months ago, one of our Succat Hallel leaders, Gary K., had a strong moment when he felt the Holy Spirit whispered to him: “Springtime for the Kurds”.  He felt this was not the counterfeit Islamic “springtime” but that we were to pray for the birthing of a real move of God among the Kurdish people.  Just after that, he boarded a Norwegian Airways plane, and the magazine cover said “Springtime for the Kurds”!

There are Christians in Syria and Iraq fleeing from the Muslim extremists who need aid. If you would like to help our brothers and sisters in this region, visit BarnabasFund.org to give.