“Not Now!” to Terrorism in Jerusalem: How to Pray

“Not Now!” to Terrorism in Jerusalem: How to Pray

Below is a prayer alert I sent out in October 2015. I felt we are to pray in a similar way now concerning the new wave of incitement and violence:

There has been recent wave of terror attacks in Israel, centered in Jerusalem. Since October 1st and until today (October 13th), the number of casualties is: 7 have lost their lives, and 99 injured (among them 10 are in severe medical condition).

Many have been asking how we have been led to pray in Succat Hallel. Here are a few major points:

I Believe We Are to “Re-Enforce” a “Gag and Restraining Order” on Demonic Incitement.

Many who read this will remember that during a similar month of incitement and violence in Jerusalem a year ago, when most journalists were predicting a long-term uprising, I received a vision concerning a menacing dragon, the Temple Mount, and incitement.

In that vision I saw a huge black dragon that was circling in a menacing manner above the Temple Mount here in Jerusalem. Each time it breathed fire from its mouth, violence was released on the Temple Mount.

But I knew this time it was planning something really much larger. Suddenly, I saw in the heavens two words: “Not Now!” Then a huge foot descended from heavens and pinned the dragon to the ground. 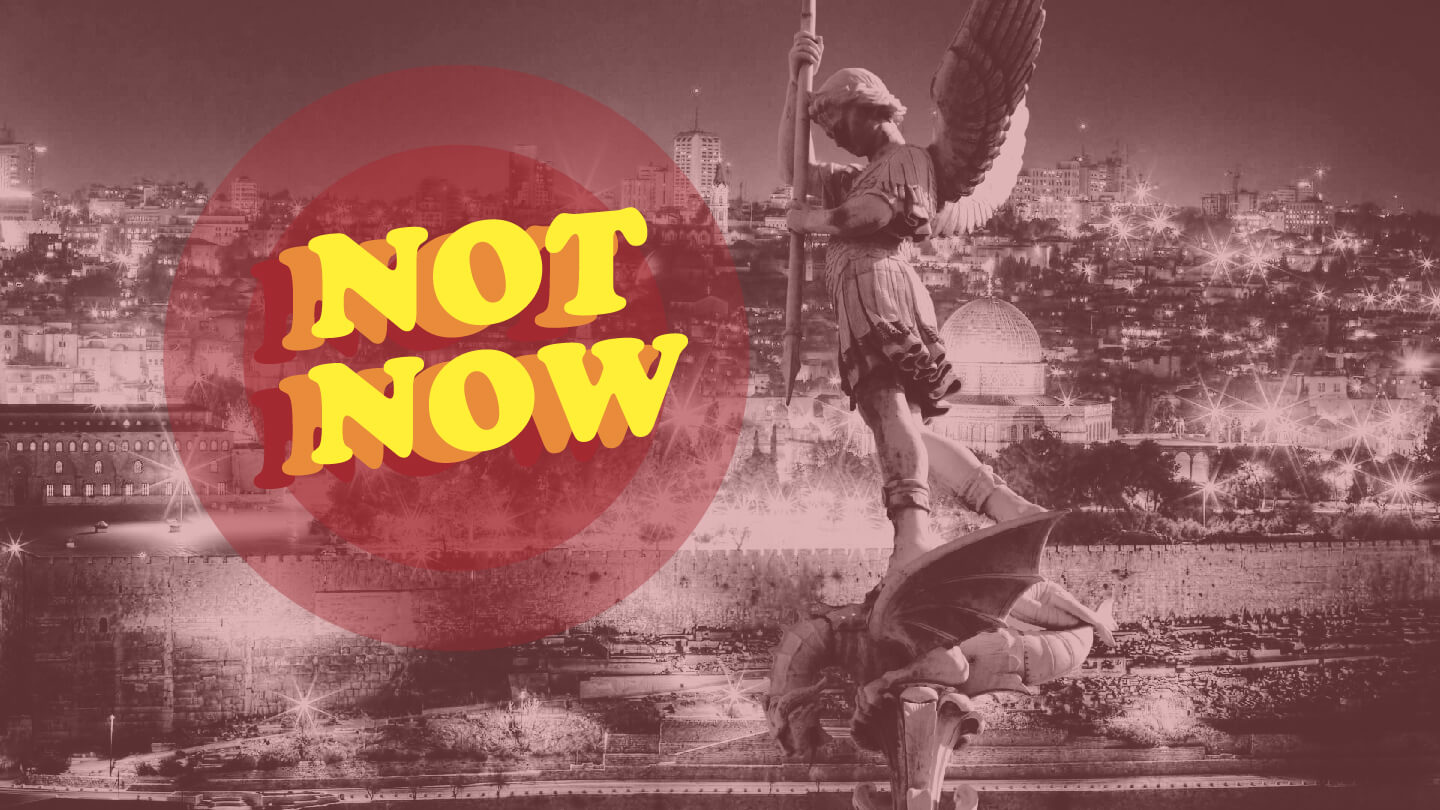 Next, the Lord reached down and put shackles on the dragon’s feet and imprisoned the dragon in the underground mosque on the southeast corner of the Temple Mount. Then, I saw the Lord’s hand put a lock on the door with a timer attached to it, seeming to indicate it would be released to do something quite “big” in the timing of the Lord, but that now was not the time.

In a continuation of the vision, I felt the Lord say we were to ask Him as the Judge of the Universe to give a “gag and restraining order”, to silence the dragon for this time period. Two days after we proclaimed the “gag and restraining order”, a major Palestinian terrorist, who had been jailed, was discovered to be releasing incitement through recordings smuggled out. He was put into solitary confinement, and within a short time the violence had died down.

As I was crying out to the Lord for revelation whether now was the time that “timer” was finished, and that spirit allowed a greater freedom, I had a new vision:

I saw that a demonic power had partially bent open the bars of the dungeon, and had succeeded in partially removing the gag over it’s mouth. The dragon was breathing out some fire, and thrashing with its tail, trying to break out of the dungeon.

Then I heard the Lord say we were to “re-enforce the gag and restraining” order. As we proclaimed that, I saw two strong angels enter the dragon’s cell, and say, “Heel!”

Just like a trained dog, the dragon stopped thrashing and sat down. The angels then put the gag back fully over its snout, and bent the bars straight, so that it could not escape.

I would encourage you to join us to keep proclaiming this “gag and restraining order” and “Not Now!” until we have seen a fully calming down of the situation as occurred last year in November and December.

Proclaim That the Lord Will “Cut Off Those Who Cut”.

Last Monday evening at Succat Hallel, our dear friend, Dr. Gene Little, shared a very specific Scripture to proclaim. Almost all of the current terrorist attacks are knifings. Gene shared that the word for the ancient people, the “Cherethites”, basically means “those that cut”.

We felt a strong anointing as we proclaimed Ezekiel 25:15-17:

“Thus says the Lord God, ‘Because the Philistines have acted in revenge and have taken vengeance with scorn of soul to destroy with everlasting enmity,’ therefore thus says the Lord God, ‘Behold, I will stretch out My hand against the Philistines, even cut off the Cherethites and destroy the remnant of the seacoast. I will execute great vengeance on them with wrathful rebukes; and they will know that I am the Lord when I lay My vengeance on them.’” – Ezekiel 25:15-17

We are continuing to proclaim that the Lord will “cut off those who cut” in Jerusalem and throughout Israel.

Pray for the Roots of This Incitement to be Uprooted

We felt strongly that we were to proclaim Numbers 23:23:

“There is no divination against Jacob, no evil omens against Israel. It will now be said of Jacob and of Israel, ‘See what God has done!’” – Numbers 23:23

Let us continue to claim over Israel divine protection against witchcraft and sorcery.

In addition, we were reminded of a way the Lord had led me to pray towards the end of the “Second Intifada”, when we who were living in Jerusalem had experienced almost four years of suicide bombings. It came out at that time that the primary incitement was coming from “Sheik Yassin”, the Islamic spiritual leader of Gaza.

Although the IDF had tried several times a targeted, “pinpoint” assassination of Sheik Yassin, he had narrowly escaped each time. We felt we were to pray he would either repent, and if unwilling to repent, that his “shield of occult and witchcraft” protection would be removed from him. Within a week, he was “taken out”, and soon after that the suicide bombings stopped, saving hundreds of innocent lives.

Let us pray that terrorists who do not have a completely hardened heart would have a revelation of Jesus like Saul of Tarsus on the road to Damascus. But if they, like Pharaoh, have fully hardened their hearts, that they would be exposed, lose their occult shield of protection, and be uprooted.

Pray that those who have been influenced by the lies of incitement would have a revelation of the Lord and His heart for them.

Last year we had a visit in Succat Hallel from an Iranian who had been a Hezbollah terrorist. He shared an amazing encounter with Jesus that had transformed him from hating and killing Israelis, into someone who had the Lord’s heart of love for them. What an amazing testimony of the greatness of the Lord!

Let’s join together for a miraculous turning of the tide in the hearts of this generation here in Israel.